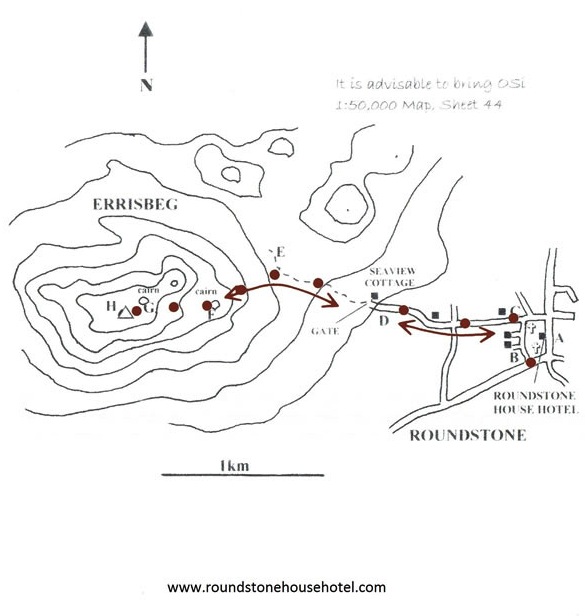 This hill route, directly between Roundstone village and Errisbeg (300m), has much to offer, not least the wonderful views from the summit. But it has a good bite for such a moderate hill. Most experienced hill walkers will find this relatively easy, but I would suggest that less experienced hill walkers should be in the company of such an experienced walker, or skip it altogether. I’d recommend a walking stick and all the normal hill walking gear. Boots are a must for this walk.

Starting at the village compass (A), head up the street and bear right passing the Catholic church. Turn right, passing the health centre (B), then passing St. Mary’s Anglican Church on the right. At the next T-junction ( C), turn left, nothing the great views of the Twelve Bens from here.

From the cairn, head West down into a “bowl”, which can be very boggy, from which the next cairn should be clearly visible up ahead, on a distinctive dome of rock. Up at this second cairn (G), when you go a few metres beyond it, you should see the trig pillar of the summit across a small valley. Now you have a final short descent to that valley and then a short climb up the the trig point (H).

The views are indeed worth the effort, particularly towards the lake strewn bog to the North. When you’ve had a look around up here, th downward route is to retrace your steps, passing close by both of the cairns. Just watch your step carefully on the descent, particularly if the ground is wet.

From the lower cairn (F), don’t make a beeline for the access road below, you will find it easier to get down if you head towards point E first. Then you can walk down on those faint paths to Seaview Cottage and the road home to Roundstone.

Back at junction (C), you can turn right past the churches again, or you can walk straight down to the middle of the village, for variety. Or the drink! 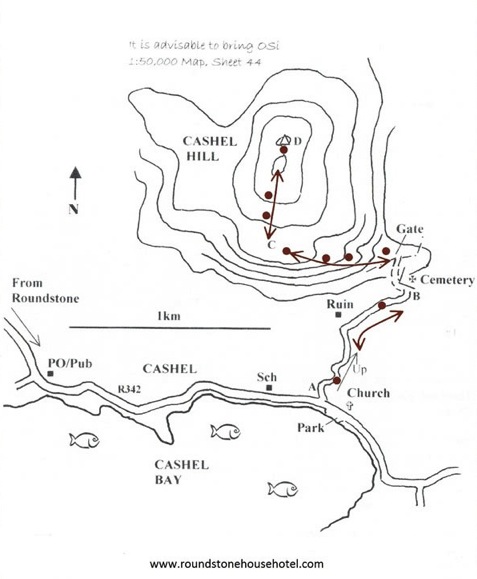 This is a simple out and back hill climb, to a summit of just 311m (1010ft). It starts at sea level, and it is quite steep nearer the top, so be prepared for bit more of a fight than you might otherwise expect. Though it is not overly demanding, this is a walk for experienced hill walkers. You should boots and a walking stick, swell as all the normal hill walking gear. Because this is a stand-alone hill rising quickly from the level countryside to a small top, the views from the summit are simply amazing.

Start & Finish: A roadside car park at St. James’ Church in Cashel, some 14km from Roundstone.

Drive to Start: From Roundstone, drive north on the R341, turning right at the T-junction for Cashel. Swing left onto Toombeola Bridge and just after the old Riverside Bar, turn right, sign-posted Cashel/Carna. Continue on this scenic R342 road beside Cloonile Bay and then Cashel Bay, passing the Cashel sign and then the former post office. Watch for the church on the left, and park opposite it.

Walk up the side road (A) just to the left of the church grounds - it is steep at first, but eases after a few minutes - leaving any gates as you found them. Ascend this road until you reach the cemetery (B) at the top. Now take the stoney path just to the left of the cemetery, and go through a gate that leads onto the open hip ground, closing it securely after you. Beyond the gate, walk left up onto the higher ground, and ascend this ridge westward. Closer to the main hill, your objective is to veer right, into a broad gully (C) at the South side of the hill. (Notice that the East side of the hill face has many rocky escarpments, and these are best avoided). Now there is nothing for it but to ascend the final steep section towards the summit. There are good grassy spaces as you slog up, but just take it steady and watch your footing.

Don’t forget to look back from time to time to watch the coastal scenery unfolding. At the top, there are actually two summits, separated by a wet grassy section. The real summit, with the contrite trip point (D), is the more northern one, and as you ascend the last few metres, you will be treated to one of the most spectacular views of the Twelve Bens, and indeed over nearly all of this part of Connemara. It is a truly wonderful panorama.

If the weather is good, you will spend quiet some tome up here. When you have seen it all, the return route is the same way you came up. Take it really carefully as you descend those steep grassy gullies now, particularly if the ground is wet. Remember to keep away from the rocky escarpments, now to the left, as you go down. Then bear left (east) across the lower ridge again - the cemetery is visible from higher up, so you should have no difficulty in heading for it. From the cemetery, head back down the tarmac road to the car park (A). 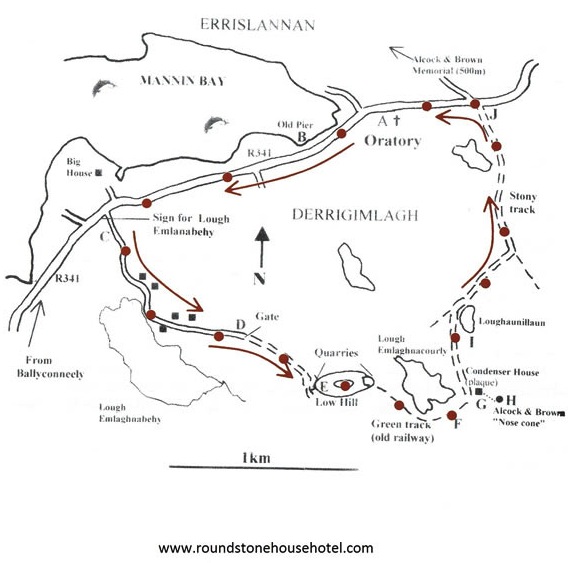 Derrygimlagh is noteworthy for several reasons. In the early years of the last century, Gugliemo Marconi established the first ever commercial transatlantic wireless station up here. Then Alcock and Brown landed their first ever transatlantic flight on the very same spot in 1919. It is nowadays a peaceful, beautiful area and I really like walking here. This route involves some walking on the R341 road, but even that bit is scenic enough and you’ll get most of it out of the way at the start.

Start & Finish: At a car parking space outside a small roadside oratory on the Clifden road, some 20km from Roundstone.

Drive to Start: From Roundstone, drive along the R341 through Ballyconneely and continue towards Clifden. When the road starts to ascend as it leaves the shoreline, watch for that small oratory, with stained glass windows, on the right. It is just over 5km after Ballyconneely. There is ample parking space here.

The first part involves setting up the loop. So start by walking from the oratory (A) southward on the R341, back the way you drove, for 2km. There are nice sea views to the right, and the road is well surfaced and wide in parts. But watch for traffic along here, and walk in single file on the right, to face oncoming traffic. You pass an old pier (B) and when the road rises, with a big house on the seaward side, your punishment is over! You arrive at aside road left © with a brown signpost for Lough Emlaghnabehy. Turn in left there, into a much quieter ambience. This road, potholed here and there, ascends gently to pass close beside the aforementioned Lough, and then continues to ascend easily away from the lough. Pass through a gate (D), closing it securely after you. Now you are on an old bog road that comes up to a still worked bog.

Ahead is a disused quarry (E) in a small hill. Bear to the right past the quarry, and then leave the road, going up left beside the quarry on good heathery ground. Head for the top of this low hill. The map says it is only 34m, but where would you get comparable views? It truly is a stunning panorama, gained for very little effort.

Walk on, past a square water tower, to the far eastern side of the hill where, in the distance, the ‘nose cone’ monument on the Alcock and Brown landing site comes not view. In another quarry, here on this eastern side, are the foundations od a well sheltered building of the Marconi enterprise, and a perfect grass path (F) curves along eastward. Follow that, enjoying those views all around. Notice the old bog workings on both sides - this green track was once the little railway that carried the turf to power the generators. This route curves past Lough Emlanacourly, over to what is now a sheep pen.

The small ruin here (G) holds an interesting plaque, which you should read, and then you can detour over to the right to see the nose cone (H). The green path curves on past another peaceful little lake, Loughanillaun (I) and soon swings down via a gate to the R341 road (J). Turn left here, and the oratory (A) is now just five minutes walk along here - resume traffic vigilance for this final session on the road.